Three communities are celebrating after being awarded cash prizes in the 2019 Great Cotswolds Clean-up competition which was organised by Cotswold District Council and sponsored by Midcounties Co-operative.

The community of Cerney Wick scooped the first prize of £500, a team from Coln Valley received £300 as runners up, and the third placed team from Stratton Youth Football Club received £200.

Judges from the Council reviewed the efforts of the volunteer litter picker groups who signed up for the competition and - after drawing up a shortlist of five contenders - they visited each location and met the organisers to discuss their projects in more detail.

The standard was excellent but the unanimous choice for the first prize was the Cerney Wick team who impressed with their high turnout – thanks to excellent communications – and their plans for spending the money, including a children’s competition to design signs discouraging fly tipping in the village.

The judges were very impressed with the second placed entry from Coln Valley which was also runner-up in 2018. Their volunteer numbers continue to grow and the organisation of their event was a model of good practice. The entry from Stratton Youth FC was a worthy third prize winner, and involved adults working with four teams of youngsters under 10 picking litter across a very extensive area, including Stratton, South Cerney airfield and parts of Cirencester.

Commendation certificates are being awarded to all the other competitors from across the Cotswolds.

Cllr Andrew Doherty, CDC’s Cabinet Member for Waste and leader of the judging panel, said: “A huge ‘thank you’ to all the teams who entered this competition – and many congratulations to the prize winners from Cerney Wick, Coln Valley and Stratton Youth FC.

"People across the District take great pride in their surroundings, and it is much appreciated when communities come together for litter picks and activities to improve the environment. We'd also like to extend a thank you to all the ‘unsung heroes’ in the Cotswolds who do this work throughout the year and in all weathers; it's excellent to see more and more people taking it upon themselves to help combat the scourge of littering.”

His comments were echoed by Midcounties Cooperative Head of Operations Matt Windridge, who added: “Well done to all the participants who worked so hard to make this undertaking such a big success. We were keen to sponsor the Council’s increasingly popular competition because it supports our efforts to give back some of our profits to local communities when they engage in ethical and sustainable activities.

"With over 600,000 members we’re proud to be the UK’s largest independent co-operative. Working together, we actively encourage grass roots activities to protect our environment, and communal litter picking is one of the many ways to bring about positive change for our planet.”

The Council ran the competition from late March to the end of April, incorporating the national ‘Keep Britain Tidy’ campaign which took place on the weekend of 23 March.

Most volunteers used equipment and bags supplied by the Council. We can supply bags, pickers, gloves and high visibility jackets for clean-up work, and also arrange for special collections of filled bags after litter picks. Please call 01285 623123 if you require assistance with equipment or collection of filled bags.

For more information about Midcounties Cooperative, please go to www.midcounties.coop 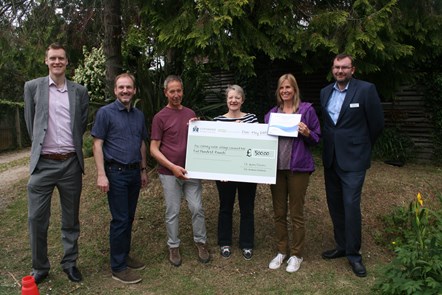