‘Join our campaign to clean up the Cotswolds’ is the message that is loud and clear on the Ubico waste fleet’s new livery featuring local ‘litter heroes’ Pauline Farman and Heather Kent.

Both Pauline and Heather have carried out invaluable and inspiring work within the community and the new vehicle liveries on the road strive to encourage others to join the revolution.

Chief Executive of Cotswold District Council, Rob Weaver, said: “I want to thank Heather and Pauline for the tremendous effort they make to keep Cotswolds clean through their litter picking activities.

“We think it’s important to recognise people who do so much for their community and we hope that others will be inspired to join them in taking pride and care in their area. We’re so proud of Heather and Pauline we’ve put them on the side of our lorries!”

Pauline Farman regularly picks litter from roadside verges, spending up to three hours a week keeping areas clean and tidy and has been regularly litter picking since she retired from work.

Pauline said, “Making the commute to and from Rendcomb each day, the litter along the verges really 'got to me' and I vowed that when I retired I would litter-pick.  Which is exactly what I do.  I try to get out at least once each week. It is important for people to take pride in where they live.

“It is quite strange seeing images of myself being driven around the Cotswolds, but it’s also really nice to be recognised in this way.”

Heather Kent is just 13 years old, and started picking up litter in her community in 2017 after taking part in a beach clean whilst on holiday.

Heather, who lives in Fairford and attends Farmors School has collected a bag of litter every day throughout Lent each year since 2017.

Heather said, “I really believe that together we can make a difference to where we live. If you pick up one piece, one bag or five bags of litter, you are making a difference to our world.”

The new livery has been unveiled to promote Cotswold District Council’s Clean and Green Cotswolds campaign, which has seen significant investment into the cleanliness and general appearance of the Cotswolds with more money going into enhanced street cleaning to raise and maintain cleanliness standards across the District.

Anyone interested in knowing more about the Clean and Green Cotswolds campaign can find out more on our website www.cotswolds.gov.uk/cleanandgreen 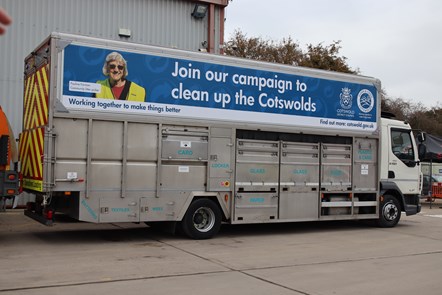