A resident has had her life transformed after a council grant led to a raft of new facilities being installed in her home.

Susan Williams from Andoversford suffers from severe chronic obstructive pulmonary disease as well as arthritis in her knees and shoulders which require regular steroid injections.

As well as this, she underwent spinal decompression three years ago for collapsed vertebrae and suffered a stroke in 2003 which affects her vision and causes her to fall frequently.

As a result, she had been unable to access the bath and overhead shower for some time and relied on her daughter for support which was limited as she lives some distance away. What was needed was an adaptation of her Bromford Housing Association property to give her safe access to essential washing facilities.

Susan was visited by an occupational therapist from the North Cotswolds team whom could see the best solution for her and husband Terry, who also has medical needs, was the removal of the bath to be replaced by a level access shower.

The occupational therapist sent a referral letter to the Housing Grants Officer at Cotswold District Council who contacted the couple and arranged to visit the next day to discuss the process and fill out the application forms for a Disabled Facilities Grant.

A surveyor from Bromford was asked to look at the property and discuss the adaptation with the couple. Plans were swiftly drawn up and agreed by all parties before the lockdown put building work on hold.

In the meantime, Mrs Williams took a tumble and required a stairlift. This was installed within a matter of weeks despite the restrictions.

As soon as lockdown was over, the contractor stepped in and the job was done by August – less than six months from start the finish, despite the pandemic.

Susan said: “The difference you have all made to our lives is unbelievable and we will be forever grateful for everyone’s support and professionalism throughout.” 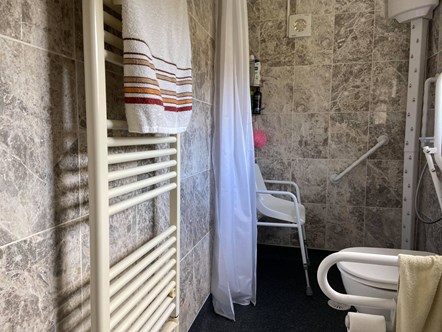